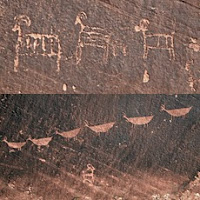 Fishing at Lee’s Ferry comes with the added benefit of
breathtaking views of natural scenery. When traversing the Colorado River in
search of Rainbow Trout, it’s easy to feel like you’re the first person who’s
ever experienced the magnificence. Visitors are often surprised to learn of the
rich and turbulent history surrounding Lee’s Ferry, a significant story of
adventure and danger.

It’s a fitting coincidence that Lee’s Ferry was first
witnessed by European explorers in the same year that the United States
declared its independence, given the importance it would play in future
westward expansion. While Native Americans had long appreciated the area for
its access to the water, Spanish settlers noticed the advantage of Lee’s Ferry
as an ideal point to cross the mighty Colorado River. As years passed, Mormons
from Utah used Lee’s Ferry as gateway to Arizona, building a fort at the
crossing point to protect themselves from invaders.
In 1870, John D. Lee, a Mormon fugitive wanted for murder by
the federal government, was sent to the landmark that would bear his name to
set up a ferry service for the migrating Mormons. Along with two wives and
several children, Lee formed the Lonely Dell settlement and began launching
boats down the river and through the treacherous “Lee’s Backbone”. It was a
rough stretch of water that would be bypassed in later years.
On March 28, 1877, after being discovered by the United
States government, John D. Lee was formally executed, leaving control of the
ferry he started to a long list of future operators and entrepreneurs. One can
imagine the caravans of eager, westward pioneers searching for gold arriving at
the shores of the Colorado River on horseback. In 1929, the ferry was rendered
obsolete for transportation purposes with the construction of the Navajo
Bridge.
Today, as travelers cross the Colorado River high above,
anglers can continue to experience Lee’s Ferry in the same way as those early
American pioneers. Marble Canyon Outfitters can help make your trip back in
time as enjoyable as possible.
← Previous Post
Lee’s Ferry Fly Fishing for Beginners: Assembling the Tackle →