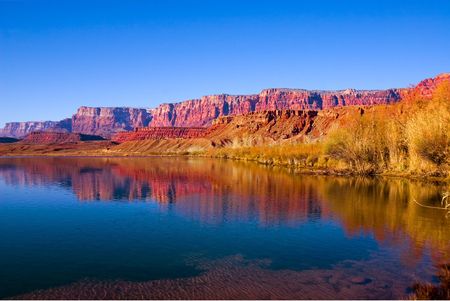 However, it wasn’t always this way. Rainbow trout weren’t introduced into the Lees Ferry fishery until the mid-1960s when the Glen Canyon Dam was first built. And at the beginning, there were very few fishermen who cast their lines into that part of the Colorado River looking for rainbow trout. For the first 10 years after the dam was built, the waters sat largely untouched by the fishing community.

Over the next two decades, the fishing in the area experienced its fair share of ups and downs. Some years, the nutrient-rich waters of the Colorado River produced plenty of fish to go around. But there was also a series of droughts and scientific studies in the area that impacted the local fishing and made it less appealing to fishermen.

Over the last 10 years or so, the fishing in the Lees Ferry area has returned to its glory days and provided fishermen with excellent fishing conditions once again. Some have even said that the fishing in Lees Ferry is the best it’s ever been right now. That could change at any time depending on a variety of factors. But at the moment, fishermen and fishing guides are having the time of their lives reeling in fish after fish between Lees Ferry and nearby Lake Powell.

Would you like to see what the hype surrounding the fishing scene in Lees Ferry is all about for yourself? Call Marble Canyon Outfitters at 800-533-7339 today to arrange a guided fishing adventure in the area.

If art is the expression or application of human creative skill and imagination coupled with beauty and emotional power, then could something like fly fishing be considered art? Perhaps. After all, it takes creativity to fly fish. It’s an emotionally-charged process, complete with the high of catching beautiful fish. Great art is often borne out… END_OF_DOCUMENT_TOKEN_TO_BE_REPLACED

Marble Canyon Outfitters offers guided fly fishing trips at Lees Ferry on the Colorado River near Page, Arizona. This remote but beautiful canyon location is about five hours from both Phoenix and Las Vegas. If you’re looking for a beautiful spot to try fly fishing for the first time, you can’t beat this wondrous place!… END_OF_DOCUMENT_TOKEN_TO_BE_REPLACED

If you were to go to Lees Ferry, you’d be at a site on the Colorado River in Arizona, about 9 miles south of the Utah-Arizona border. Lees Ferry is unique because it’s the only place for hundreds of miles where you can access the Colorado River from both sides… easily. Back in the day,… END_OF_DOCUMENT_TOKEN_TO_BE_REPLACED

Do you know some common fly fishing lingo? For instance, do you know that you’d be using a rod, not a pole? There are several keywords associated with fly fishing and here’s your chance to learn (or review) some of them… Terms to Know The word “guide” can apply to someone who guides your fishing… END_OF_DOCUMENT_TOKEN_TO_BE_REPLACED

Recreational fishing, for pleasure or competition, is one of America’s top pastimes. A pastime is defined as an activity someone does regularly for enjoyment rather than work. In other words, a pastime is a hobby. In this crazy world we’re living in today, with bad news on the Internet all the time, isn’t it nice… END_OF_DOCUMENT_TOKEN_TO_BE_REPLACED

Don’t be fooled by the Colorado River’s name. Although it starts up in the Rocky Mountains in Colorado before spanning for almost 1,500 miles, about a third of the river’s length is located in Arizona. It’s a very important part of the state and provides Arizona with everything from lakes situated inside of canyons to… END_OF_DOCUMENT_TOKEN_TO_BE_REPLACED

If you’re planning on fishing in unfamiliar waters on an upcoming trip or trying a fishing technique like fly-fishing out for the very first time, you should consider hiring a fishing guide to help you. A fishing guide can help augment your experience and teach you a few tricks of the trade. However, before you… END_OF_DOCUMENT_TOKEN_TO_BE_REPLACED

Oftentimes, if you visit most marinas in Anytown, U.S.A., you’re likely to see a lot of boats just sitting there at the docks. Many people own boats, but they’re often working at their jobs rather than spending the day on their boat. That’s a shame! If anything, we all need more leisure time in our… END_OF_DOCUMENT_TOKEN_TO_BE_REPLACED

Do you want to burn off a few pounds? One of the most fun ways to do it is by kayaking. You can burn hundreds of calories per hour kayaking, and that can lead to real results if you kayak on a regular basis. That’s not the only benefit of kayaking, either. Check out a… END_OF_DOCUMENT_TOKEN_TO_BE_REPLACED